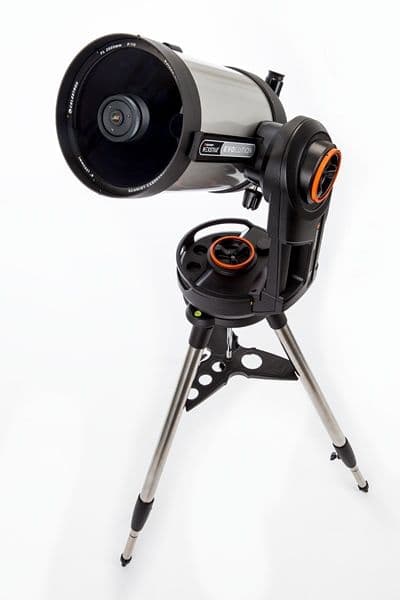 
Having used the Celestron NexStar Evolution WiFi Telescope ourselves for several weeks now we can completely understand why the BBC Sky at Night Magazine Review has been so positive.  It really is a joy to use and is very user friendly.  The basics work equally well via the handset or a tablet, but we do like the fact that using the tablet alows the telescope to pick up location date and time automatically (as long as its enabled and available on your device) to speed the whole alignment process up.

The Celestron Sky Portal App is based on the Excellent Sky Safari 4 and has an excellent and intuitive 'tap and go' user interface. It can thankfully be set to a night vision friendly red mode so is not too bright to use in the dark! and has a seachable database of objects and descriptions including a list of 'tonight's best' objects.

The App is available on Android and iOS. For download links and more details just click the image on the right.

In day to day use we have found the ergonomics of NexSatr Evolution to be excellent too, especially the addition of extra handles on the mount base make lifting the telescope in and out of the box and general assembly easier too. Clutch releases on each axis, handy scales on the tripod legs and extra eyepiece holders all show that Celestron have listened to customers and have thought about real world use.  Overall we think the Celestron NexStar Evolution is more than worthy of its 5 Star rating.

Celestron’s NexStar Evolution 8 is the first Schmidt-Cassegrain telescope with integrated WiFi. allowing you to slew to all the best celestial objects with a tap of your smartphone or tablet. Connect your device to NexStar Evolution’s built-in wireless network, and explore the universe with the Celestron mobile app for iOS and Android.

Use the planetarium interface to view the night sky in real time or display a list of celestial objects currently visible based on your time and location. Celestron's proprietary SkyAlign alignment procedure is built right into the mobile app, so can be ready to observe within a few minutes.


Own this product? Let us know what you think.
Write a review