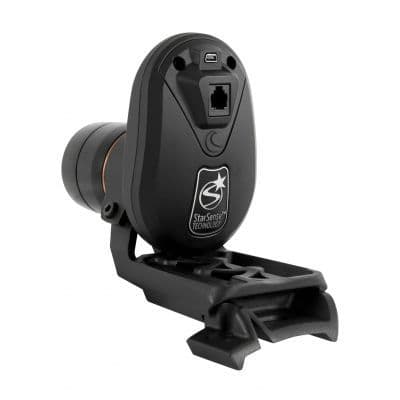 Before StarSense, using a computerized telescope required a lengthy alignment process of finding and centering at least two bright stars in the telescope’s eyepiece. But StarSense automatically aligns itself, no user input needed. With StarSense, you become an instant astronomer—even if you’ve never used a telescope before.

StarSense is not only compatible with all of Celestron’s current computerized telescope models, but backwards compatible with many older models as well. (See compatibility list below.)

The StarSense Accessory includes a small digital camera that attaches to the telescope’s optical tube, along with a specialized hand controller. Just set up the accessory, push the Align button on the hand controller, and StarSense starts capturing and comparing images of the night sky against its internal database of 40,000 celestial objects. In about three minutes, StarSense will gather enough information to triangulate its position and align itself. Then, press the Sky Tour button: StarSense will automatically slew to all the best stars, planets, galaxies, and more based on your exact time and location.

Even the most advanced telescope users will love using the affordable StarSense Accessory. StarSense replaces expensive software used for Advanced Mount Modeling, providing superior pointing accuracy from horizon to horizon. Users can add as many calibration stars as desired to give their telescope mount a new level of accuracy.

5 stars based on 2 reviews
Richard Crow
from Southampton
"

I'm extremely pleased with this connected to my Edge 'scope and CGX-L in place of finder scope. Setting up I use manual selection of 4 or 5 sky locations (because I have a Pod observatory I can't use auto setup). 5 mins and I'm good to go. If your lucky enough to have a string of good nights you can use last setup and be ready to observe in perhaps 1 or 2 mins. Your chosen target will be very near the centre of your camera even on a small sensor and always in the field of view of your chosen eye piece.

As with almost everything to do with Astronomy this gadget isn’t cheap - but it does make life very easy. I had read on some forums that there was an issue with the setup as it needed a firmware update from Celestron’s site before use. I bought this gadget in early March 2020 and there was no need at all to fiddle around with it, it worked straight out of the box so it seems that Celestron has ironed out this issue.

Set up is very easy, I use the Sky Portal App on my iPad and the Wi-fi accessory (separate) from Celestron. I do a lot of observing from my back yard. I have a big tree to the South and the house to the North. The alignment process was not hindered by this at all. If the camera could not see any stars it just moved on - so this isn’t a big issue.

Once aligned for the first time there is a need to calibrate with your ‘scope (essentially what you would do normally to make sure your finderscope and main ‘scope are looking at the same thing). Once that is done there is a final alignment and away you go.

On the first night of use it found everything I wanted and it was bang in the centre of view. There are times with computerised mounts where the alignment is not always great and for some of the fainter objects (class 5 skies 11” SCT) you are not entirely sure that the reason you can’t see it is because it’s too faint or that your alignment is off (the parts of space where even a star chart isn’t hugely helpful).

The second night’s viewing about two weeks later (everything entirely disassembled and then reassembled and in a slightly different part of the garden) did not require any recalibration. Once the alignment was done it put everything bang in the centre of the eyepiece. This was impressive because I was convinced I’d have to do another calibration.

I would recommend teaming this up with the sky portal, the hand held does do exactly what it is intended to do but the amount of times I have spotted something interesting on the portal and thought, ‘oh let’s look at that’ are too many to count.

Yes you can do the 3 star align and yes you can use a chart - this system though does save a huge amount of time and puts everything you want to see bang in the centre every time. A really good bit of kit, and if you want to go old school you can always not put it on for a night :).